Watch SEC football games online on the SEC Network – the one and only twenty-four hour sports network dedicated to SEC sports.

The SEC Network features unique programming with an SEC slant. Get up to the second updates, news and features straight from the campuses of your favorite SEC school.

And, best of all, you can watch live SEC sports on the SEC Network, including football, basketball and baseball games.

SEC Network subscribers are able to watch SEC football online 24/7. That means all the games and the classics, too!

Watch SEC Football Games Online – Our full listing of where to find SEC football games streaming on the Internet. 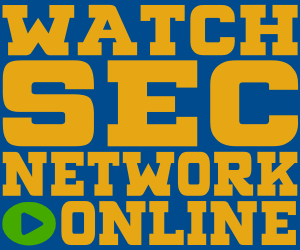 There will be at least 45 SEC football games (three each week), 100 SEC basketball games, and 75 SEC baseball games streamed on the SEC Network the first year alone. In all, there will be over 1,000 SEC athletic events broadcast live during the network’s first season.

Just think, we get to watch live SEC football games online in the Spring. Fourteen SEC football games in April, as a matter of fact. This includes the Alabama A-Day Game, Florida’s Orange and Blue Game, the Texas A&M Maroon and White Game, etc. And, how about SEC basketball midnight madness in September?

Even SEC Volleyball, Soccer, Golf, Tennis tournaments will be streamed on demand and in ESPN HD. Whatever live SEC athletic event that is in progress, even if it’s behind the scenes, you are going to get it.

Some key takeaways from the ESPN/SEC deal:

Drum roll please! Here is the link to the official SEC Network – you can thank us later, enjoy yourself:

©2022 SEC Football Online is an independent fan site and is not affiliated in any way with the Southeastern Conference or any of the conference's member institutions or partners.
Note: We do not host any streams of any kind, never have and never will. We only provide links to the official legal websites and partners of the SEC.