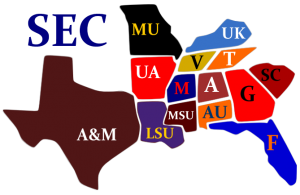 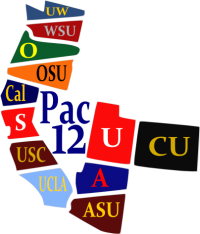 Truth is, both conferences are exceptional. Both have won their fair share of National Championships. Both have some decent college football programs as members. And, both have seen some of the best players to ever grace a football field. But, which conference is the better of the two?

We did some number crunching – because that’s what we do – and you might be surprised at what we found. Our findings are based on the all-time head-to-head football games between each of the member schools of both conferences. This includes regular season and bowl games. Some games may have been played before a particular school became a member of the SEC or Pac-12, since a few games predate the founding of the SEC in 1932. Doesn’t matter with us. All we care about are head-to-head matchups in our calculations.

We used Stassen’s opponent vs. opponent database for games through 2013. We threw out the old Big 8-Big 12 Missouri vs. Colorado games because the two schools used to be in the same conference. Mizzou leads the all-time series 41-31-3 – by far the most games played between a member of the SEC vs. a member of the Pac-12. Probably wouldn’t have skewed the numbers too much keeping it in, but we took it out anyway. We then totaled each of the head-to-head records and placed them in our wonderful, interactive table below.

Below is the SEC vs. Pac-12 all-time head-to-head records for each team. Click on any of the fields in the header to sort by head-to-head matchup, wins, losses, ties, and winning percentage by team in ascending and descending order. Read the table from left to right, SEC team vs. Pac-12 team. Conference totals are at the bottom of the table. Scroll below the table to check out our findings.

So, what does the future hold? Our key takeaways.

If you know anyone that spouts rhetoric about the Pac-12 being better than the SEC in football, feel free to send them our way. We will be happy to inform them of the truth. And The truth is in black and white here. Also, don’t give me that, “Who has the better record in the 2000’s” crap. The SEC was 9-11 against the Pac-12 in the 2000’s, not counting Mizzou and TAMU, big deal. What about the 70’s, 80’s, and 90’s? Why not look those numbers up?

Oh well, back to the games. Auburn and Wazzu are playing in 2013. Gus Malzahn vs. Mike Leach. All kidding aside, that one might very well be a decent game. A&M and USC play in 2015 and 2016. Tennessee meets USC in 2021 and 2022. That’s all of the SEC Pac-12 football games scheduled in the future unless we get some bowl game action.

There are some things on our wish list that we would love to see happen between the SEC and Pac-12 in the coming years. We leave you with a short list of SEC and Pac-12 schools that have never met on a football field. These are games that really need to be scheduled:

#1. South Carolina vs. Oregon State – The Cocks versus the Beavers – an arousing combination to say the least.

#2. Vanderbilt vs. Stanford – We know these guys are smart, but how come they’ve never met on the gridiron? I know – why don’t we settle who’s the smartest on the football field.

#5 A couple of SEC vs Pac-12 bowl games every year – Come on, at least somebody would go to the game. Fan support was definitely lacking at a few of the venues this year.

Thanks for reading and hope we didn’t offend anyone. It’s all in good fun anyway. Please leave a comment below if we missed anything. As always, thanks from your friends at SEC Football Online.